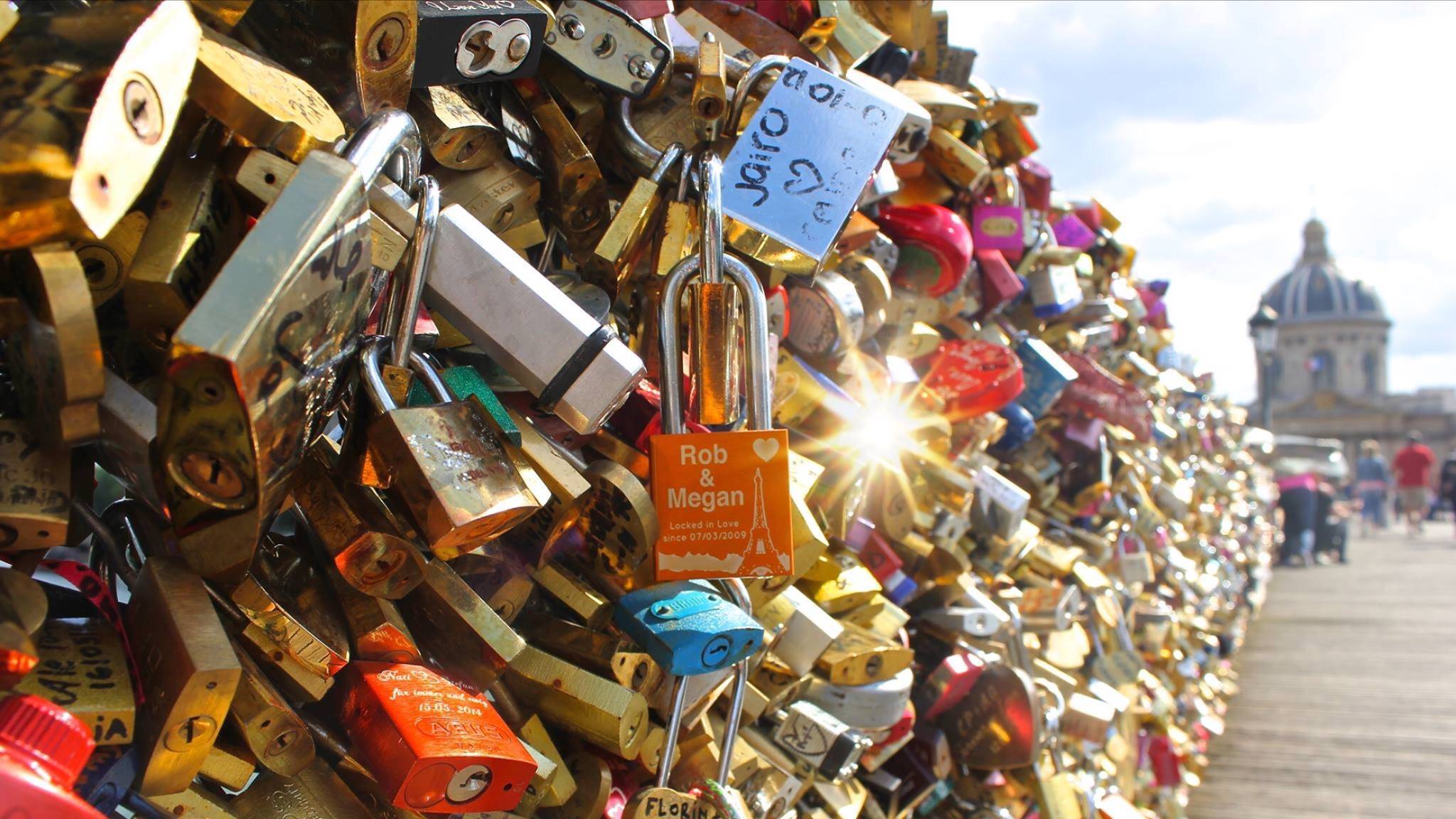 A love lock or love padlock is a padlock that couples in love, most traditional lock to a bridge, as a declaration of their love. Typically the locks are engraved with the initials of the lovers, the lock is then attached to the railings of the chosen bridge and the key thrown in to the water below to symbolize unbreakable love.

Since the 2000s, love locks have been a prominent feature at many bridges worldwide the most famous is a bridge in Paris, The Pond des Arts, but more about that later.

So where did this seemingly ultimate gesture of romance come come from and is all as it seems?

The history of Love Locks dates back to a small town in Serbia over 100 years ago.

It was1914 and Europe was on the verge of war. In the small town Of Vrnjacka Banja there lived a boy named Relja. Relja was on officer in the Serbian army and was facing imminent deployment to fight on the front lines of WW1. Like so many others Relja was young and in love. He had recently fallen for a local school misstress named Nada and the couple were inseperable and soon became engaged. However the course of true love never did run smooth. On the 28th July 1914, one month to the day that Archduke Franz Ferdinand was shot dead by a Serbian national, Austria declared war on Serbia. Relja was forced to say goodbye to his betrothed and sent to defend his country.

Nada was heartbroken, but she believed in her heart of hearts that Relja would survive the war and they could continue from where they left off.

This is however where this tale of true love in the face of adversity comes to abrupt and not so romantic end. Relja went to war in Greece, where he fell in love with a local woman from Corfu, swiftly breaking of his engagement to Nada never to return to Serbia. Nada was heartbroken, and she fell into a grief that she never recovered from. The schoolmistress died young and alone, of a broken heart, another tragic ending to a story of young love

Word soon spread of the betrayal and the other girls in town were understandably perturbed by this turn of events, and they quickly moved to ensure their own romantic futures. The women of Vrnjačka Banja went into a panicked frenzy buying padlock after padlock, quickly writing their names and those of their betrothed on the locks before attaching them to the bridge where Nada and Relja used to meet. The keys were hurled into the river, ensuring a life of fidelity.

The story of Nada and Relja was largely forgotten until Serbian poet Desanka Maksimovic brought it back to life in her poem, Molitva za ljubav (Prayer for Love). This time the story caught fire and young lovers across town started attaching padlocks to what soon became the Most Ljubavi, or ‘Bridge of Love’. Most Ljubavi is a pedestrian bridge in Vrnjacka Banja and it is known as the earliest mention of the love padlocks tradition, where padlocks are left on the bridge railing by couples as sign of their everlasting love.It is one of the famous landmarks of Vrnjačka Banja, and it is the best known among the town’s 15 bridges.

Towns all over the world started copying the tradition, but places like Paris, Barcelona and the rest would eventually be forced to cull the locks in order to preserve the bridges, starting the process all over again. South Serbia is a land of superstition, however, and the locks have never been removed from the Bridge of Love. There are more than 15 bridges in Vrnjačka Banja, but you can’t mistake the one that has captured the hearts of men and women across the globe.

In 2015 Paris city officials started to remove padlocks symbolically fastened to one of the French capital’s main bridges by loved-up couples. Fastening love locks on to the Pont des Arts before throwing the key into the River Seine beneath had become a massive tourist tradition in recent years. However these bridges were not designed to take the weight of so many locks. The fastening of love locks had become such a trend that close to 1 million locks weighing in at 45 tonnes had been attached to the bridge and it had started to collapse in parts. The Pont de l’Archeveche, near the Notre Dame cathedral, is also having locks removed from its side.

This site uses Akismet to reduce spam. Learn how your comment data is processed.