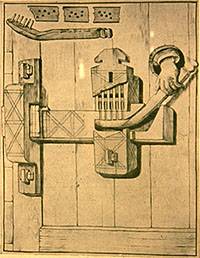 From the very beginning of modern civilization, we as humans have always had the need to keep possessions and things we hold to value safe, therefore for just as long we have been developing ways in which to keep these items safe. In the earliest of days this was done by intricately tying ropes into knots to keep things hidden away and safe. But as the time went on new technologies were developed, true locks made from wood and metal started being used across the world.

The earliest known lock and key device was discovered in the ruins of Nineveh, the capital of ancient Assyria. Locks such as this were later developed into the Egyptian wooden pin lock, which consisted of a bolt, door fixture or attachment, and key. When the key was inserted, pins within the fixture were lifted out of drilled holes within the bolt, allowing it to move. When the key was removed, the pins fell part-way into the bolt, preventing movement.

History of mechanical locks started over 6 thousand years ago in Ancient Egypt, where locksmith first managed to create simple but effective pin tumbler lock that was made entirely from wood. It consisted of the wooden post that was affixed to the door, and a horizontal bolt that slid into the post. This bolt had set of openings which were filled with pins. Specially designed large and heavy wooden key was shaped like modern toothbrush with pegs that corresponded to the holes and pins in the lock. This key could be inserted into opening and lifted, which would move the pins and allow security bolt to be moved.

It wasn’t until the Roman Empire that locks really began to shine. Building on Greek designs for locks the Romans introduced metal to lock construction making them far stronger and able to protect valuables. The Romans were also able to shrink locks and keys making the key far easier to keep close. Many wealthy Romans use to wear keys as jewellery as a sign of their affluence. During this time wards were also developed, ensuring that only correct key with correct shape of projections can push corresponding pins before lock could rotate and throw the bolt.

After the fall of the Roman empire the development of locks seemingly ground to a holt, there just wasn’t the funds or technology available for advancement.

It was in 1778 when the next advancements in locksmithing came about. Robert Barron, with the help of technological advancements managed to design and create the first double acting tumbler lever lock.His double acting lever lock required the lever to be lifted to a certain height by having a slot cut in the lever, so lifting the lever too far was as bad as not lifting the lever far enough, the principles behind this lock still remain today. In 1784 this lock was improved on by Joseph Bramah from Barnsley who designed a lock that remained unpickable for 67 years.

1818 saw the emergence of Jerimiah Chubb who designed the Chubb detector lock. A Chubb detector lock was a type of lever lock that contained a re locker, which would jam the lock up if unauthorised attempts to gain access were made. Only inserting the original key would re set the lock. Chubb still remains a household name today.

The final notable advancement in locking technology came with Linus Yale in1848 who developed the first pin tumbler lock.This lock design used pins of varying lengths to prevent the lock from opening without the correct key. His son then slightly built on this  inventing and patenting a smaller flat key with serrated edges as well as pins of varying lengths within the lock itself, this design remains the basic principle for pin tumbler locks today.

Today, majority of world’s locks are based on the inventions of these engineers, with only a small portion using advanced techniques such as magnetic keys and anti-pick technology included in the pins or levers of locks.